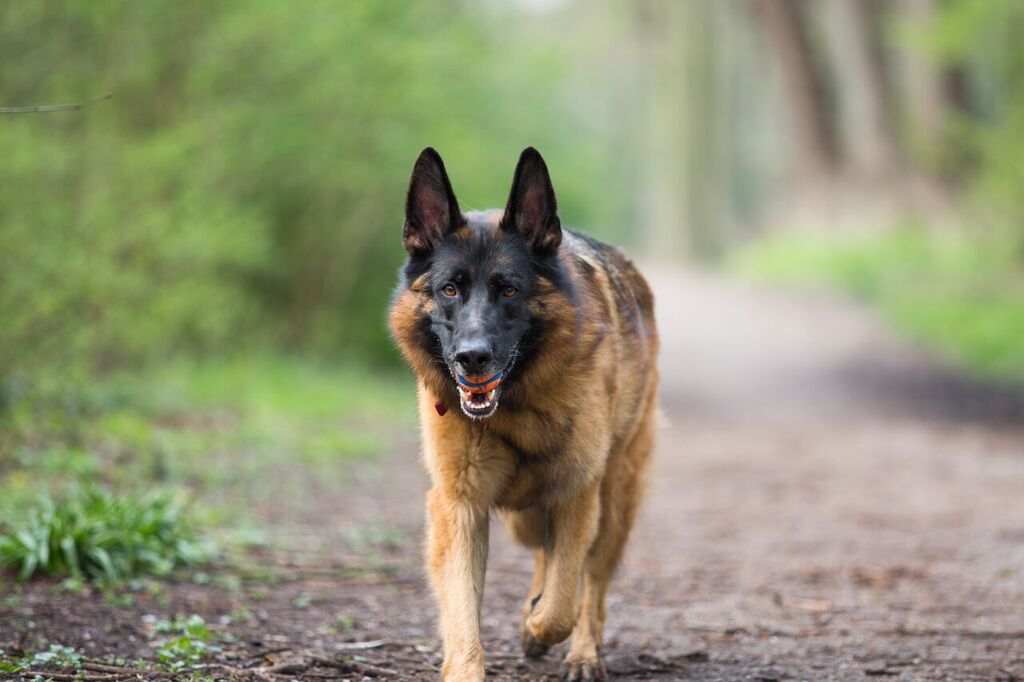 When I told my family and friends that I was bringing a fifty kilo, (almost) six-year old, male German Shepherd with aggression issues home from the shelter, they thought I was barking mad.

“What if he is too aggressive?” “What If you can’t train him?” “What if he attacks a dog or person?” These questions became all too familiar when I decided to adopt Nero.  According to the shelter workers, due to Nero’s behaviour, breed and particularly large size they considered him a ‘problem dog’ who had had little (if any) chance of being rehomed. In his history notes it was written that he had turned his aggression towards both dogs and people and this was obviously going against him.  He stole my heart at ‘woof’ and I knew after our first encounter that he would be coming home.  In my eyes, Nero was simply misunderstood and a chance and challenge I was willing to take.

The root of the problem.

After spending a few days getting to know one another, I soon realised that Nero was specifically fear- aggressive. If a dog is unsure or frightened of a situation they will do of three actions: flight, fight or avoid. Upon spotting another dog he would rely solely on his sight instead of his nose and begin barking and lunging.  His  bark was high pitched and his body language was more than enough evidence to confidently categorise him under the ‘avoid’ reaction. I had been informed at the shelter that Nero had had a bad experience as a puppy where he got hurt by another dog. Since that incident he had never socialised with other woofers. Nero was projecting ‘leave me alone’ the only way he knew how – by barking and using his size to his advantage. He’d had years of practice in which he learnt that this is what it took to keep other dogs away.  It didn’t matter if the dog was across the street, in the forest or at the opposite end of the road, if Nero spotted it he automatically turned  into the Big Bad Wolf.

Rules and boundaries are something that I implemented from day one and they continue to stand. I needed Nero to see me as his teacher in order to rehabilitate his behaviour and the only way to do this was by earning his trust and respect. You must be consistent in every single aspect of your training techniques, procedures and methods. Repetition is something dogs can follow and helps them understand the routine you are creating. Nero had to learn to listen and stop making decisions for himself. If I was to tame his aggression towards other canines, my training had to start at home. Simple obedience is the foundation of any dog training so that’s exactly what I did. I started at the beginning with basic commands and gradually worked my way up to introducing Nero to another dog.

I knew Nero would benefit from the balanced energy of another calm dog who could ‘lead’ the way in his training. The helping paw of a trusty dog is priceless when it comes to dog behaviour modification. Our beloved family dog Daisy fitted the bill perfectly. Daisy is the sweetest, most submissive dog I have ever had the pleasure of training.  Being a two year old Cavoodle (King Charles Spaniel x Poodle) she is much, much smaller than Nero. A few thought I was pushing my luck when I decided to use Daisy to help me rehabilitate an aggressive German Shepherd. But in dog world, energy beats physical appearance and Daisy successfully earned Nero’s trust.  No dog is too big or small for Daisy to befriend and without her, Nero’s rehabilitation process would have been much slower.

It didn’t take long for me to catch on that Nero loved a good game of fetch.  Once I had the confidence in Nero to let him off leash to play, I began using the ball as a tool  to redirect his attention off of surrounding distractions. I used his love for the ball to my advantage so he could learn to accept other dogs into his personal space. Armed with my trusty Chuk-it ball and calm energy I began taking Nero to the local parks where I knew multiple dogs would be roaming free. Once my confidence began to soar, so did Nero’s.  The main thing I had to master was to relax when I saw a dog in the distance. Dogs are a mirror of our behaviour, and if you are unsure, that uncertainty will be projected onto your canine friend who will act accordingly. With positive reinforcement, patience and a lot of attention to detail I got to the point that Nero could point-blank ignore every dog. It didn’t matter if they were barking right behind him or sniffing – those golden amber eyes were on me at all times.

Nero has made incredible progress in a short space of time and is calmly confident in being part of my weekly pack walks. I’ve introduced him to multiple dogs of various breeds and sizes and had no issues! It’s important that every experience with another dog is a positive one so I strive to keep it fun with new toys and treats and change the location often.  Nero is an absolute treasure and despite his history, he is fast becoming the dog he was meant to be all along.