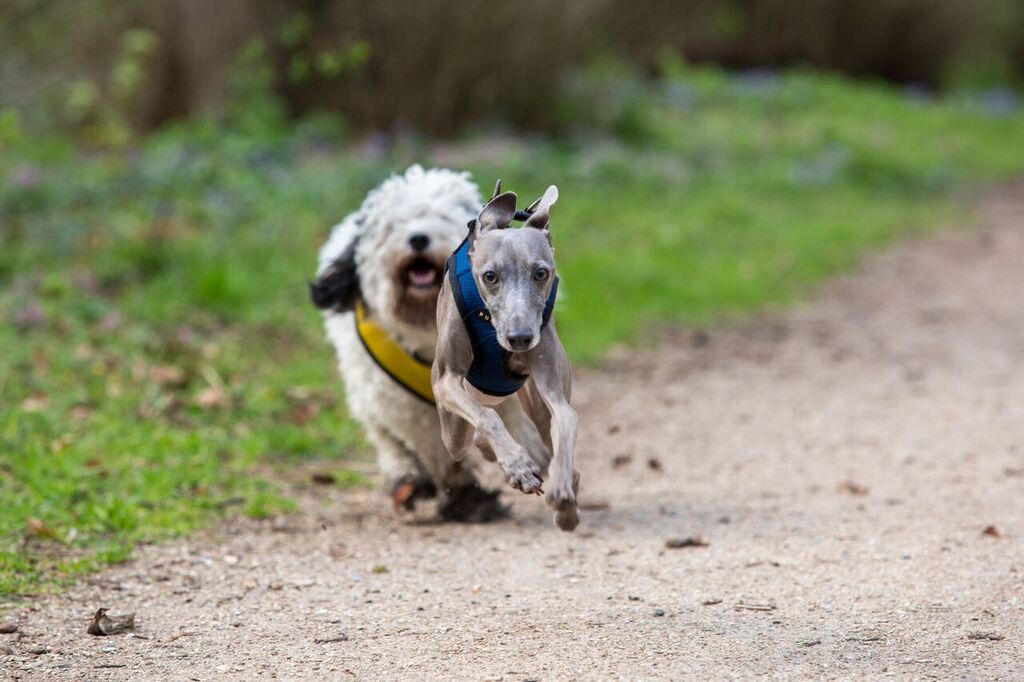 Haarlem is such a wonderful place to walk your dog. There are so many woodland places to explore and the best thing is that the locals don’t have a fear of letting dogs interact. Too often I find fellow dog owners afraid of Nero. Some pick up their little dogs upon seeing us approach or give us a wide berth. Others turn in the opposite direction or freeze. I’ve even had one scream and run. (I’m not kidding.)

My favourite kind of dog-walkers are those who are unafraid to let their dogs be dogs. Roaming nature, following scents and socialising with other pooches is exactly what a dog walk should entail.  Thanks to my training, I now have that trust in Nero to behave, listen and most importantly enjoy himself when walking in the woods. I have no concerns when Nero mingles with smaller dogs. He’s hung out with multiple Chihuahuas, Italian Greyhounds, Yorkshire Terriers and even puppies. I managed to curb that initial prey drive towards smaller woofers when socialising him with Daisy at the very beginning. 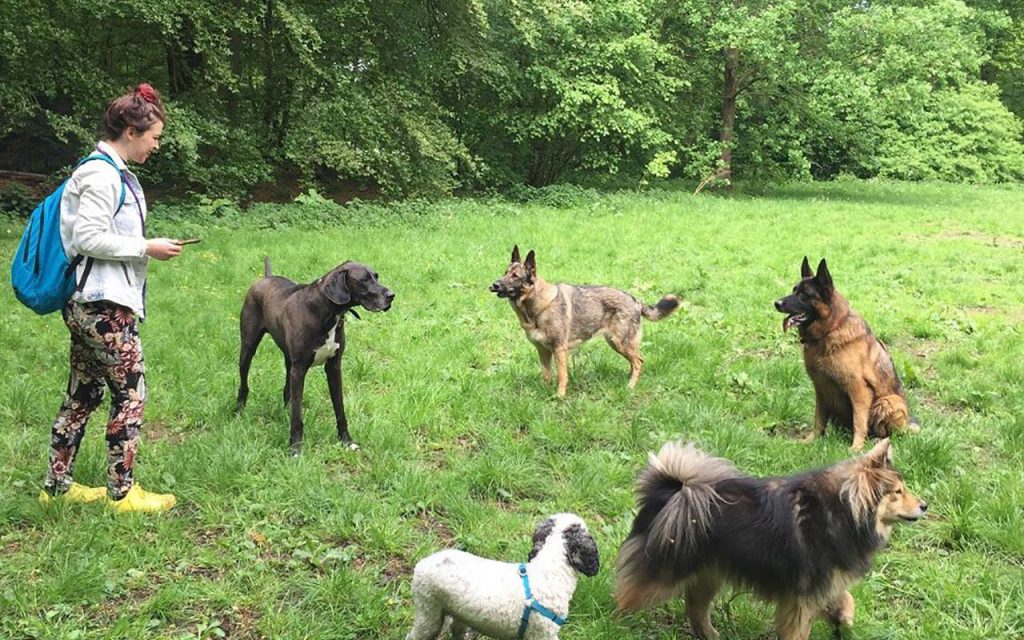 Every time we visit Haarlem’s parks we encounter multiple friendly dogs. Nero’s positive experiences at The Hout have progressed his socialisation skills without a doubt. The only way for him to master his irrational fear of other dogs is to be around them and learn to accept them.  Allowing him to make his own decisions off leash whilst surrounded by dogs and looking to me for direction has given him the confidence to meet many wagging tails in various environments. 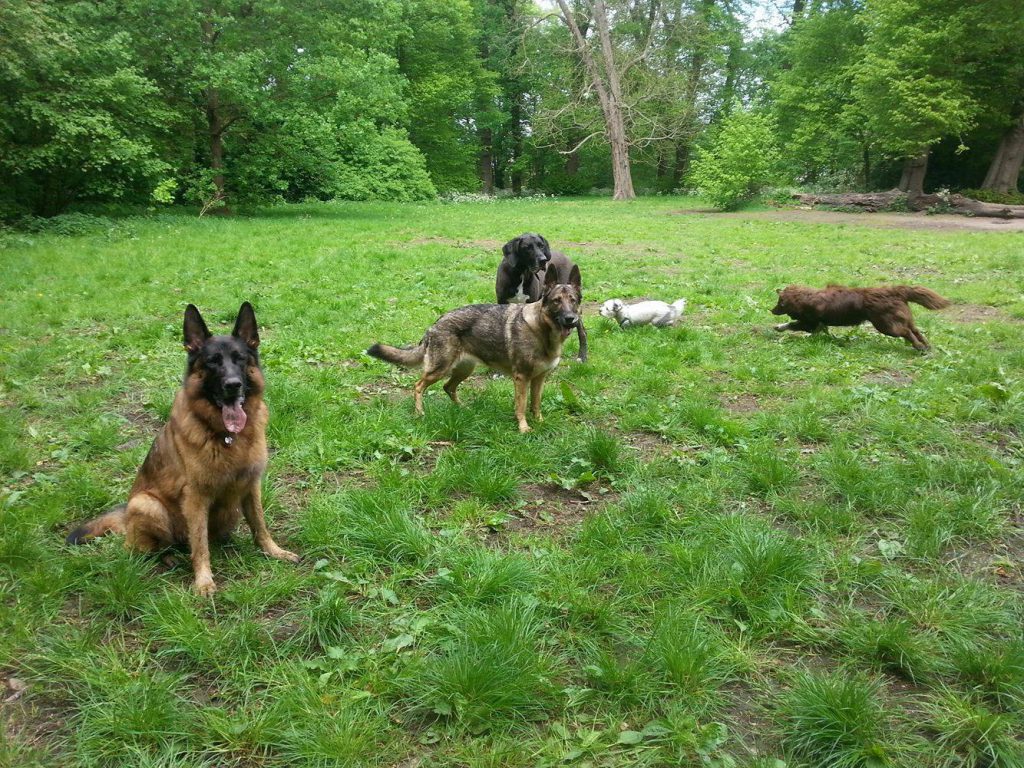 Whilst wondering around The Hout with Daisy and Nero today, I made it my mission to find some bigger dogs that Nero could interact with.  I felt that Nero’s lack of experiences with larger breeds was holding him back from reaching his full potential. Smaller dogs obviously do not have the threat or presence that larger ones do and I want Nero to be accepting of EVERY dog. I kept hearing a low, loud bark that echoed through the trees and figured whatever dog owned that voice was big enough to introduce to Nero.  It sounded like a dinosaur and I was excited to see what could be making such a sound. We followed the bark and entered a small open patch of space where I spotted a Great Dane and another (smaller) German Shepherd.  Confident in my approach and accompanied by Daisy and Nero, I walked casually into the clearing and began throwing sticks for my two dogs. As expected, it didn’t take long for the other pups to become interested and join in.  I was in my element when meeting the Great Dane who was roughly the same size as a Shetland pony. The other Shepherd was a seven year old female who joined in our game of fetch straight away.  I even had her and Nero doing synchronised ‘sit’ and ‘down’ commands! 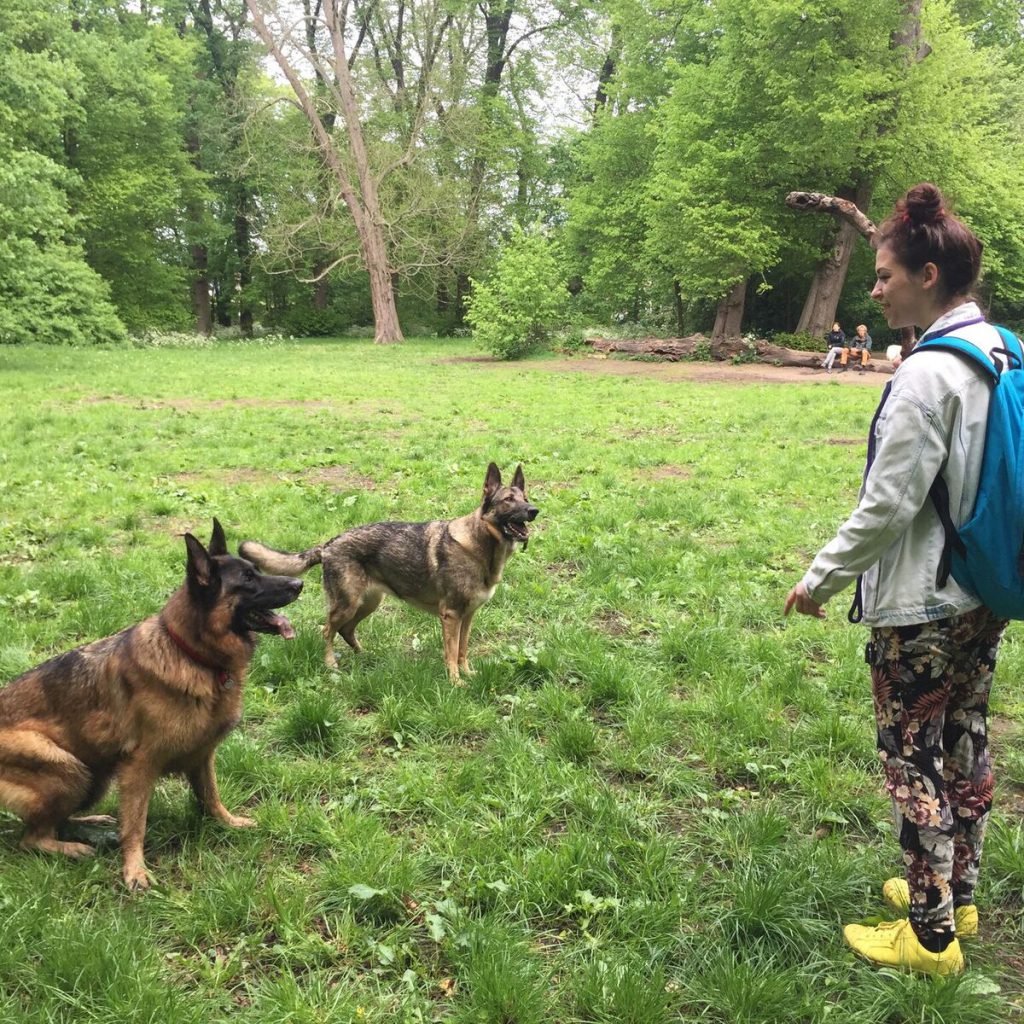 To my delight, we were then joined by a very vocal, fluffy fella who had no hesitation in running over to Nero and sniffing his butt (which Nero allowed.) Our motto of ‘a butt-sniff a day keeps the fear aggression at bay’ is a good method to practice when working with unsocial dogs.  Then came a trio of Huskies and a Collie mix (I think.) I could not believe my luck. Here was my ‘aggressive’ boy, part of the action with a pack of nine other canines – majority of them being bigger power breeds. Daisy, although the smallest of all the dogs present was having a whirl of a time chasing and being chased by the Collie mix. It was hilarious to see her run through the legs of the great Dane towering over her and rewarding to know that she wasn’t phased by any of these four-legged beasts. 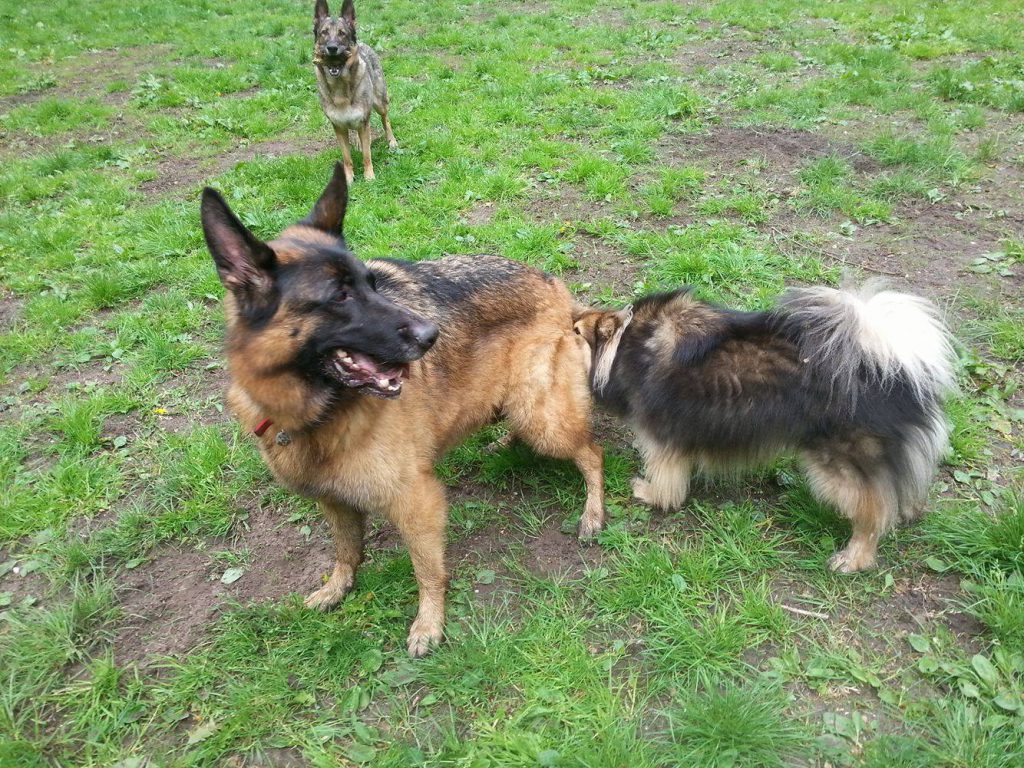 I am 100% confident that Nero is not a biter. The old saying ‘his bark is worse than his bite’ is a perfect analogy of Nero’s behaviour if he becomes afraid. There was a moment when all nine dogs came over to sit with me by a bench. Nero followed suit but the crowding of all the dogs in a smaller space made him slightly tense and he let out a couple of those high-pitched barks I’ve mentioned in previous posts. It was actually directed towards the Huskies who were trying to get a good sniff of him. I automatically re-assured him by gently taking his collar and making him sit. He did and the other dogs carried on about their business as if nothing had happened. Nero retreated to the outskirts of the pack and sat observing the other dogs before running back in when a ball was introduced.

This was a wonderful experience for Nero. Never underestimate the power of a pack. They have the ability to teach dogs in a way we humans can not. I was lucky to find and form a group of such polite, well balanced dogs that all contributed to Nero’s positive encounter. There were a few gruffs and growls from multiple dogs but the owners present just let them continue and sort out their differences without getting involved.  And that is exactly the way it should be. Unfortunately I didn’t manage to get a snap including the Huskies but just head on over to our Instagram accounts zero2nero and crazydaisycavoodle for the videos!