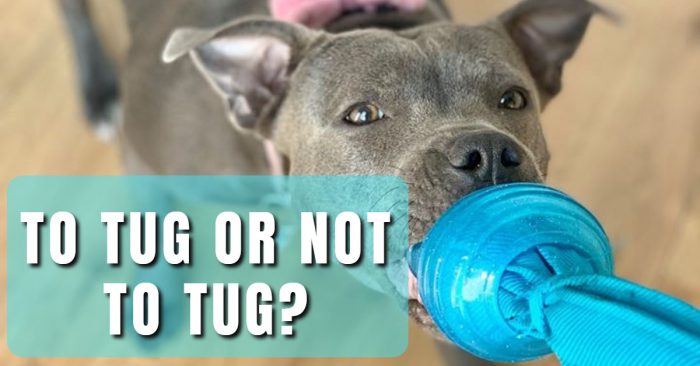 Do tugs turn dogs into thugs?

That is the question. A dog owners dilemma that I have heard so often in the past few months that I’ve decided to dedicate an entire blog post to the (somewhat) controversial topic that is tug of war.

It’s all about that ”A” word… arousal! It can be both your best friend and your worst enemy…

“My neighbour told me it makes a dog too possessive…”

“Never let the dog win – YOU must be dominant!”

Do you have trouble asking your dog to drop that sock or Big Mac burger box they found on the pavement? How about that decaying rabbit they just sniffed out in the bushes or that other dogs ball that your dog deems irresistible?

As a professional dog trainer, I find tug toys to be an excellent training tool – a simple rope bridge between two species that develops trust, builds confidence, channels instinct and drains energy. Play generally is an incredibly powerful motivator for many dogs. When interactive games are combined with training, it creates neural pathways in the brain that (with repetition) will increase the likelihood of a dog being able to tune into their human guardians when arousal levels are peaking! It appeals to the predatory motor pattern of a dog and to the seeking system. It helps dogs them regulate their own reactions.

Teaching a dog to release something from their jaws is a life skill and one that many owners (and those within the dog industry for that matter) struggle to train successfully. Especially as whatever the dog has scored dramatically increases in value the second the human reacts. You know what I mean – the classic scenario of “FIDO, NO! FIDO DROP THAT RIGHT NOW. COME HERE! I SWEAR FIDO, I’M BLOODY SERIOUS! HEY, WHERE ARE YOU GOING? FIDOOOOOO! F**K YOU FIDO, YOU AIN’T GETTING DINNER TONIGHT!” 😉

It’s a given that the harder a dog works at tug, the more irresistible that item becomes. Asking a dog to let go of said item and changing the expectation, pattern and outcome by allowing them to win builds trust. Seeing a pooch parade around with their trophy and them returning to the handler to engage in another round of the game is a beautiful sight.

Increasing and immediately decreasing arousal levels can be a great way of improving and nurturing impulse control and reinforcement history behind behaviour. Presenting a tug as ”prey”, throwing it after release, hiding it for the dog to discover and retrieve is FUN! The human end of the tug becomes more interesting which positively spills over into all aspects of training. Dogs are predators, they love to stalk, to chase, to bite, to dissect and consume. If you suppress such instincts, it will appear in less than appropriate scenarios. We can do all this with a simple tug toy. Heck, it can even be a tea towel with some tape wrapped around it. Get creative. Figure out your dog’s play manner, material and preferred style and run with it! By recreating the predatory motor pattern in a safe and controlled manner, we set them up for success in the real world.

What about frustration? I hear some of you ask is it ethical to expose our dogs to such stress? After all, withholding a tug from a dog that REALLY wants to grab it does result in some form of frustration, right? You bet it does!

Doesn’t that set a dog up to fail? Hmm, well, what happens if we create a pattern of avoiding such activity and excitable exercises? Can we truly expect a dog who never has the opportunity to practice switching between drives ”perform” in real life scenarios?  I prefer to build a dog up through through play, proof the basics and use functional reinforces to reward effort than pretend a dog will ignore their most primitive instincts.

But my dog doesn’t like tug? Of course there are many variables, depending on your dogs history, experience, temperament, breed and let’s not forget genetics. Some breeds will be naturally predisposed to bite and hold or bite and shake. Others will naturally want to retrieve and others take the prize and make a run to the other side of the training area. Some naturally prefer the ‘single player’ mode when it comes to toys. I modify my approach of teaching tug depending on the dog in front of me. You can ALWAYS work with a dog to build communication via play. Mix your motivation. Break behaviours down into bite-sized bits and learn to love the process!