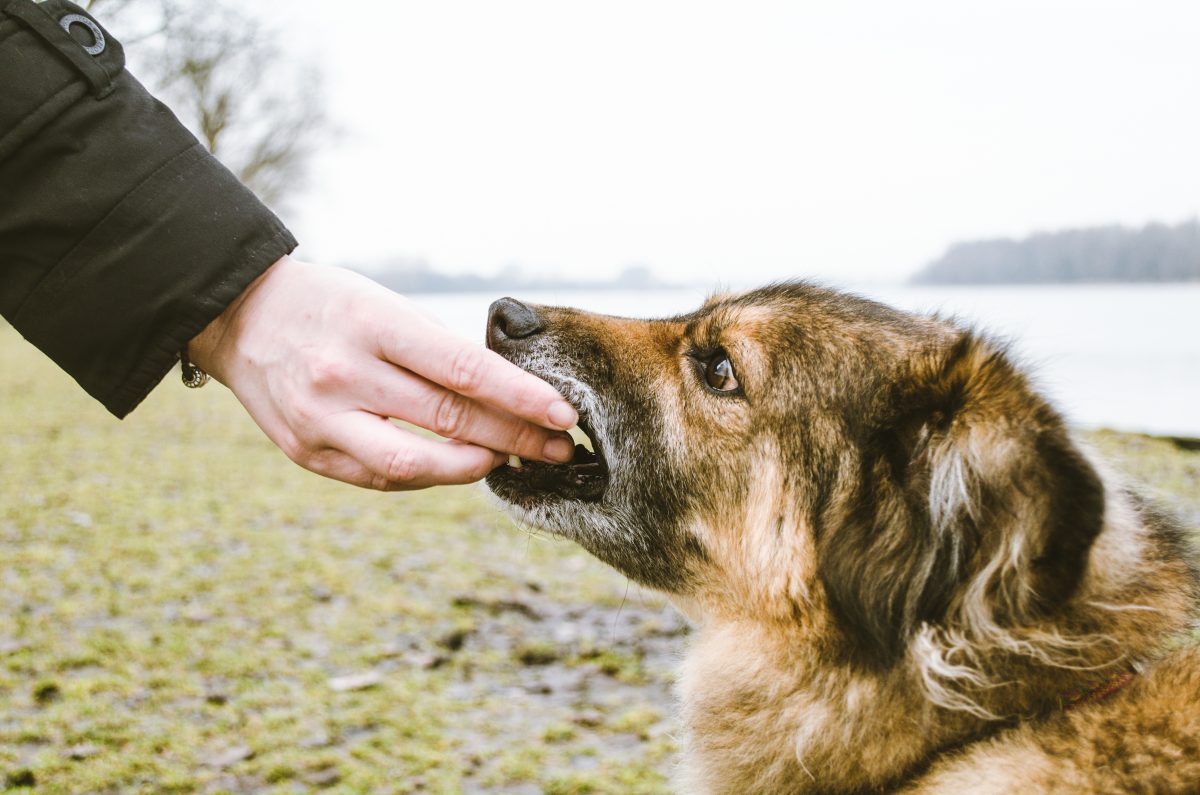 One thing I discovered very quickly in the world of dog training is that it’s extremely split.  There are hundreds of ways you can train a dog and a thousand and one techniques that can be challenged or endorsed. Whatever method you chose to practice, you can be sure you will have some negative-Nancy (there’s probably one right now furiously typing in response to this post)  telling you that there is a better way. But I’m not looking for a better way because this way works just fine.

Personally, I do not have a ‘one size fits all’ ideology and prefer instead to combine and mix various techniques depending on the dog in front of me. I’m forever looking to expand and broaden my knowledge of canine behaviour. No dog is the same, just as no person is the same. No canine/human relationship is the same. Hence why I have trained under various institutions and individuals who practice both PP (purely positive) and balanced training (rewarding wanted behaviour and correcting unwanted behaviour.) In my opinion, if you wish to be a master of your field you should be aware of, understand and know how to apply multiple methods. By combining calm energy with classical conditioning and desensitisation methods I rehabilitated my first really aggressive dog that would lead me down the path of becoming a dog trainer. I won’t ever claim to know everything when it comes to dog training – that’s virtually impossible and anyone that tells you otherwise is kidding themselves. I spend much time in the company of large packs of dogs, watching and understanding their body language and interaction.  You can read and digest the many theories (as you should) but nothing compares to having real life experience with various breeds, behaviours and observing communication.

Every trainer believes his or her techniques are the best thing since sliced bread. Whilst there is nothing wrong with this attitude, it’s a shame that it results in such conflict. All of us who are active within the dog training industry surely have the same common interests and goals – to help the dog and to aid the client build a better bond and understanding of one another? To help, guide and support individuals to their ideal relationship and reach those training goals? To save that dog that is out of control from ending up in the shelter? I guess it would be an ideal world where every trainer would be respectful and inquisitive of another’s skills, input and ideas. Both types of training work! But does it last? Why are particular methods more successful with specific behaviours? Why did you choose that technique over another? There is so much we could all learn from one another to benefit the canine species.

Balanced training has become a popular conversation topic of controversy. The terms ‘dominance theory’ or ‘alpha’ or ‘aversive’ strikes debate every time it is mentioned.  Yes, you must have a ‘leadership’ mentality when training using those techniques. You must also be assertive, calm and unafraid of the scenario in which the dog tends to react. Embrace every opportunity as a learning possibility rather than shy away and avoid the undesired behaviour -tackling the problem head on. Of course, you must invest the time and effort to be educated to apply the techniques calmly and correctly. Harshly yanking your dog on a slip leash every time he lunges or barks at the dog across the street will not result in behavioural change. You have to know at which exact moment your dog focuses and at what point to redirect their attention. It’s not supposed to hurt your dog, nor is it supposed to fuel frustration with your four-legged friend. Perhaps too many people have watched popular dog TV shows and despite the fact of stating ‘don’t try this at home’ they do just that and apply the training completely wrong which gives ammo to the positive movement.

The element of energy that many sneer at and disagree with is at the core of this type of training.  Upon adopting Nero, it was as if the communication line had been opened and I was able to have a conversation with my dog using energy and body language. Nero understood what behaviour I wanted and what behaviour was unacceptable. In no way did I ‘dominate’ my dog through physical pain, rather show the way as a calm and confident leader that he could follow and trust. We built that mutual trust and respect through play, consistency and exposure to various environments. He accompanied me to work, on public transport and was heavily socialised with other dogs using control and management. I worked hard every single day. I rewarded and praised good behaviour and corrected the bad.  Telling your dog ‘no’ is made out to be the eighth deadly sin, when in fact it is very useful – as long as you are clear with pairing a behaviour with such a cue. What does ‘no’ mean to the dog? It’s a little word with a big meaning.

I’ve read articles describing balanced methods as outdated and cruel. I completely agree that no dog should feel intimidated or be forced into submission.  Now, THAT is dominance. But this balanced theory is misunderstood and does not encourage such actions.  It’s something that has been sensationalised by the media. I challenged those who sent me strong words of disagreement with mindful questions. Many of these people had never dealt with a dog with behavioural issues, let alone canine power houses that display severe aggression.  Most had had their woofers since pups and majority of which were smaller breeds. I make this point as I want to emphasise the difference in rehabilitating a small breed to a larger breed. Although the element of training is the same, the difference with the bigger breeds is that they can do a lot more damage if a behaviour is allowed to spiral out of control. On the other end of the scale, I have received many more inspiring comments from people all around the world congratulating Nero’s development and success and asking me what the secret is to changing an aggressive dog. It amazed me just exactly how many people struggle with their dogs aggression on a daily basis. Many completely revolve their life around it! Hiding behind cars and dustbins to avoid that dog in the distance people – I’m talking to you!

Whilst we’re on the positive movement subject, I have to put my two pence worth in. Never have I ever seen such negativity of a cult type manner. As I previously wrote, I have worked with many PP bodies and I use many of their techniques in my own training and have absolutely no issues in listening to, learning and discussing such methods. Some of the best trainers in the world are PP. Some are balanced. Both have alarmingly amazing success rates of rehabilitation and their reputation speaks volumes about their work.  So, obviously both types of training work. It’s not just black and white. What I do see as a worry is the amount of name calling and threatening behaviour from such individuals that classify themselves as PP and FF (force free) attacking balanced trainers or any trainer that has a different belief to their own over the internet. So much to the point that I know trainers who have had their homes and possessions vandalised due to the way they train by purely positive individuals! Oh, the irony! I’m sure there are also balanced trainers who display the same aggression to PP people but in my experience it usually tends to be the latter.

There is an entire secret society online for dog trainers. Hidden Facebook groups full of both FF and Balanced trainers who feel unable to ask a question or voice their opinion on other public groups for fear of being attacked and deleted. Sharing ideas and experiences is golden when it comes to dog training. You have to get very, very creative in some cases – a unique plan created by you that successfully worked for a dog and owner could potentially help someone else in a similar scenario.  Healthy discussion is an imperative skill that any dog trainer or behaviourist should possess. Of all the tools in a dog trainer’s toolbox, an open mind is one of the most valuable. Disagreement is a good thing – but when it comes down to playground retaliation from adults it’s downright embarrassing and completely useless. Do you truly believe you can convince a stranger to convert to another method whilst displaying such frustration and throwing insults like I would tennis balls for my dog? I don’t believe in firmly pushing your beliefs onto a dogs owner let alone an established trainer. It’s hard enough suggesting to the human that in order for their dogs behaviour to alter, they will need to change their own first. What happened to civil conversations that can enlighten certain aspects of a theory that challenge your own stereotypes?

Another big topic is the use of training tools such as prong and E-collars. Although I have never and do not have plans to make use of such devices , I’ve recently found myself part of heavy conversations with other trainers and friends discussing the good, the bad and the ugly. I have heard marvellous stories of dogs being days away from euthanasia who have been trained within a couple of hours whilst using these tools. (Of course this behaviour will need consistency and proofing over time BUT using such collars provided these dogs with one thing they did not have before – time and a chance to be a better dog.) Whilst discussing the use of such tools, I was asked a question that truly made me think. Regardless of background or beliefs, have a little read:

Imagine you had a dog under your care. A dog that suffered with bad traits such as severe dog/human aggression and an endless bite history. Said dog is a day away from being put to sleep as adopters overlook them due to such behaviours and the future of this dog is almost certain. Many trainers have tried prior to yourself and failed in rehabilitating this dog using positive reinforcement and balanced training methods. Would you consider or even entertain the idea of using a training tool to attempt to save this dog? Would the possibility of successfully showing a potential new owner that this dog can and could be trained using those devices go against every ounce of your being? Or would you still attempt a repeat of the same methods the dog has previously not responded to? Would you rather see a dog put down than trying everything available to you on the market? Could you combine your own training skills with such tools?

Really think about it. I’d appreciate if you would kindly share your answers and comments too. Nicely now gang, let’s keep it calm, civil and insult free!

5 thoughts on “The dog divide.”