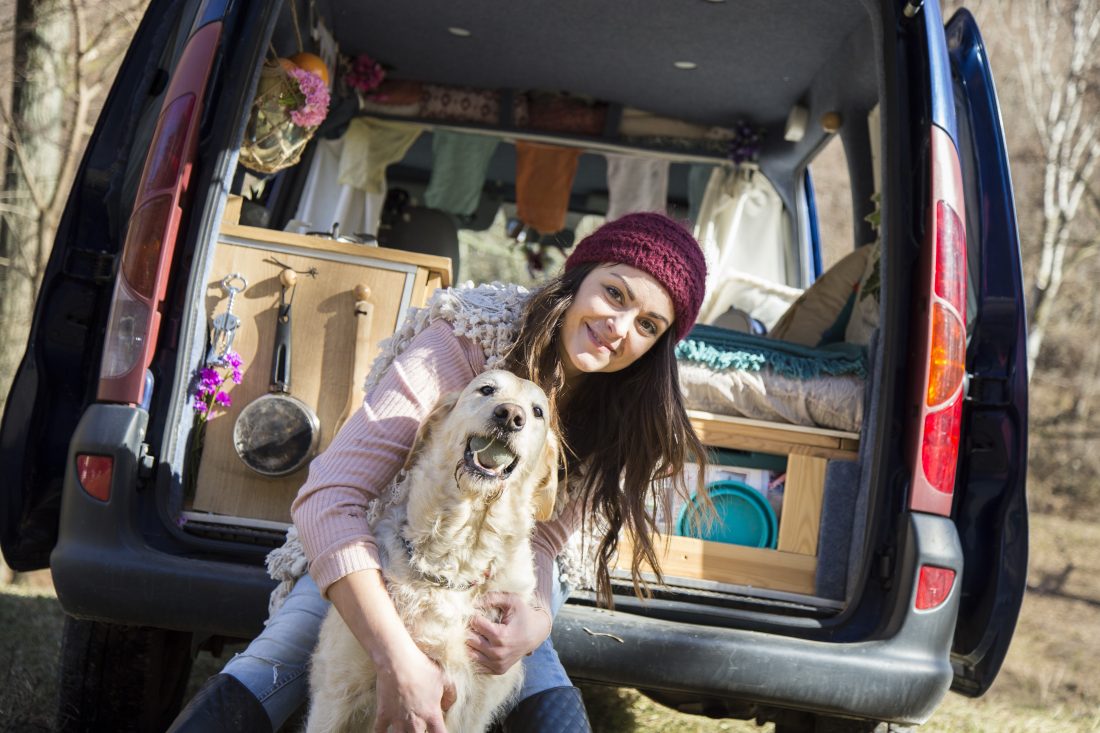 The story of an inspirational girl, her adopted dog, their revamped van and the open road…

You may have previously seen this motivated young woman’s story circulating on social media. Marina’s adventures certainly captured my attention which is why I was absolutely ecstatic when she confirmed she was driving to Amsterdam and happily agreed to meet another canine – crazy girl to share her story over a cappuccino. Marina is a twenty something year old Italian girl who decided to pack up her stuff, quit her job and grab life by the horns by creatively reviving an old van to act as a home away from home.  Her travel companion is none other than her four legged friend, the 10 year old Labradoodle mix Odie. (I know, total life goals in those two sentences.) Odie’s is a true ‘Underdog to Wonder dog’ tale. After being surrendered to a shelter in England  due to a break up in his previous family, nobody could have imagined that this pup would end up travelling the world.  Just as nobody could have guessed Nero would become the face of a dog training company. Having lost her dear dog a few months earlier, Marina began volunteering at the local pound and ended up finding not only her BFF but also her inspiration and entire reason for wanting to restore an old van to travel the world.   Funny how adopting a dog can seriously change your life, eh? Together, Marina and Odie have driven cross country through Europe, so far stopping in England, France, Germany, Italy and of course Holland. With no deadline or time frame to return home, wander lusting about their next destination is as simple as just that. Pull out the map, check the border policies for bringing in dogs and off they go! Marina explained that she is not aiming to cram as many countries as possible into their journey, rather to stop where it feels right, meet new people and experience various cultures. Future destinations on the list include returning to England for a few months, Spain and Portugal. Marina also informed me that she had avoided visiting Switzerland due to requirements for dogs to be re-vaccinated against Distemper. It’s not that she disagreed with the vaccination, rather she felt Odie had had way too many cocktails injected into his body already. Having always been passionate about travelling, Marina knew that taking her fur-baby around the world would be much more convenient on wheels than by train or air. Driving in a ‘mobile home’ meant waving goodbye to those extra stresses of finding pet-friendly accommodation and expensive canine travel costs that can so easily build up.  Not to mention quarantine risks and the anxiety and stress that a dog may experience during transportation between flights.

I’m totally guilty of knowing almost next to nothing when it comes to DIY stuff. Ladies, we have no excuse – serious brownie points to Marina for gutting, converting and decorating her Gumtree bought Renault Kangoo into ‘home sweet home.’ That’s real girl power! Yep, she did this entirely by herself (with no previous technical experience) by self educating using YouTube videos and researching online. Where there’s a will there’s a way, right? Marina made many modifications, installed a kitchenette, a bed and the floor. Whilst making all these changes, she started her own blog, naming it after her trusty four wheeled friend ‘Pam the van.’ At pamthevan.com you can find all kinds of useful information on how she transformed an ‘old tin can’ into ‘home sweet home.’ Expect to find posts such as: Don’t get me wrong, there are still many things to consider before hopping in your car and driving to the closest border with your four legged friend. Conveniently, Marina has shared some tips on her blog regarding travelling with dogs in Europe so you may find it that tad easier if you are inspired to go and explore the world one paw at a time! Of course I had to ask Marina her opinion regarding her visit to The Netherlands. She replied by saying that like Germany, Holland’s relaxed, lenient attitude towards dogs entering cafe’s and shop’s was refreshing compared to the likes of England.  She described the Dutch people as super friendly, was charmed by the canals, fell in love with all the flowers and the many bikes roaming the city. She found the downsides of Amsterdam to be the weird roundabouts (I couldn’t agree more) and the difficulty of finding vegan friendly foods in the shops. I can honestly say that Marina was one of the most ambitious, energised, determined and positive individuals I have ever had the pleasure of meeting. Odie was totally calm and collected with kind eyes and a friendly approach. With her furry friend by her side, Marina has friendship, a cuddle buddy, protection and a brilliant story that has earned her the spotlight she so deserves. Nero and I hope to see you on the road some day real soon!