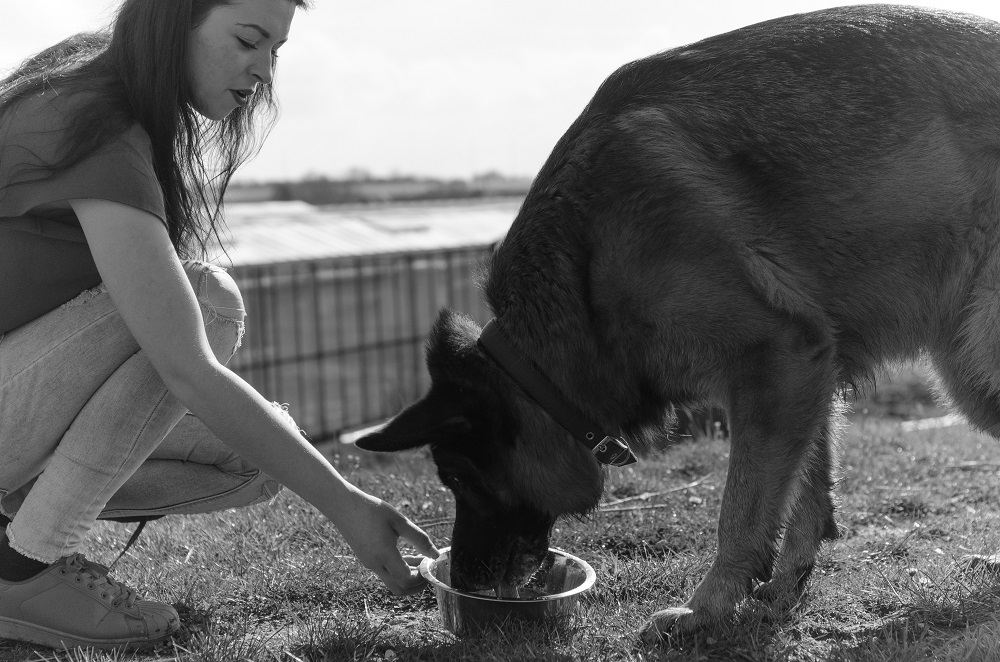 When Nero came home, I was extremely wary about his food antics. I was told at the shelter that whilst Nero had no appetite issues, he assumed that if there was food around that he was entitled to it. The last thing I wanted was a great big dog begging or jumping up for food whilst I was eating. What about when guests came over for dinner? Or if I left my breakfast unattended on the kitchen side? From day one I applied the following four steps to introduce and maintain manners when it came to food.

This was  imperative for me to practice as Nero had to understand over-excitement at meal times was not acceptable. In the wild, a pack of wild dogs or wolves will not eat a bite until the alpha has fed. Alpha eats first, period. I believe it should be the same for domesticated dogs. I don’t allow Nero around the table whilst we eat as this will only encourage begging behaviour, plus drool and that high-pitched whining.  I used to send Nero to bed the moment dinner was ready. Now he automatically goes to bed or lies down elsewhere away from the dinner table. He is no hassle at all and my friends are always impressed with his lack of interest around found.

So you’ve gobbled up your dinner and now it’s your fur-baby’s turn. To reinforce that you are in control of the food, it’s a good idea to make your dog wait for a few seconds before they are allowed to eat.This exercise helps in teaching your dog to stay and to listen to your commands. Out of respect they can not touch the food until you say they can. It’s also great for teaching your dog self control and it is so much easier to feed a patient dog waiting for your release command. I applied  this method by simply telling Nero to ‘sit ‘and ‘stay ‘whilst I prepared the food. If he decided to approach whilst I was still in the process, I stopped what I was doing and took him right back to the same spot and repeated my obedience commands. It may take a few times until your dog understands but with repetition and patience he will. Once the food is ready, place it on the stand/floor. If your dog makes a move toward the bowl, block him by claiming the area in front of the bowl. Send them straight back to the previous position.(I use pointing as a gesture that we learnt whilst practicing non-verbal communication.) Be prepared to get involved by guiding them by the collar. Repeat the stay command. Once your dog has waited for a minimum of five seconds you can give your relase command so he can eat. You can practice and see how long your dog can hold on for – but try not to do it to the point he is frustrated. You know your dogs limits and tells better than anyone else.

It also makes it a plus for when you ask someone else to feed your dog. Nero knows not to jump or get too excited when he hears the kibble been tipped into his bowl. If you have a larger dog you’ll understand when I say they are heavy and can use that mass to their advantage. I swear, Nero makes the ground shake. It’s especially important to install this mannerism if there are young children around. You don’t want your young ones having food in their hands with a food-crazy dog around.

Work up an appetite.

EXCERCISE! I can not stress exercise enough! Lack of exercise is the number one reason dog owners are in distress! Your dog needs to fulfil their natural instinct to work for food. Naturally they would go and hunt before being able to feast. By taking your dog on a good long walk you are mimicking this instinct and rewarding your dog for their work on the walk. It also builds the want for food- we all know food tastes so damn good when you’ve worked up an appetite!

Give your dog a set amount of time food is left down. It makes it easier for you to schedule feeding times and prevents your dog from becoming spoilt and turning their nose up. If Nero doesn’t eat then I give him an hour. Usually it’s gone within about two minutes but occasionally he refuses it and I find him being sick later on. It’s also much more pleasant to clear up an empty plate than it is  un-touched food.

Quick note: If your dog is food aggressive, you could potentially help reduce this behaviour by providing a stand or unit that lifts the food bowl off the floor. By feeding your dog on a higher level you reduce the territorial stance over the bowl. Instead of leaning protectively over the food they are able to look down and eat at ease.