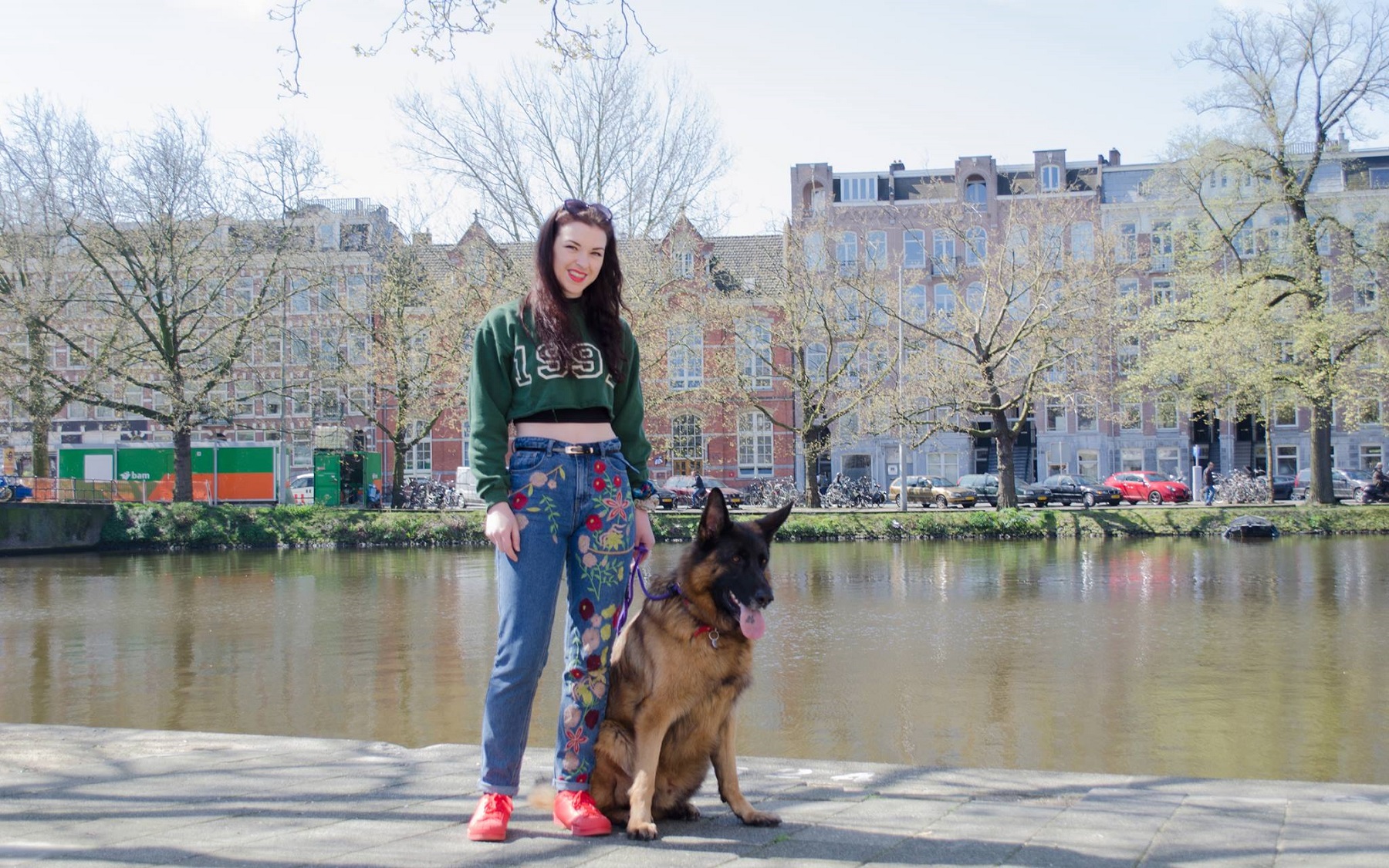 It’s time to put the training to the test. If you’ve been following our Instagram account zero2nero, you’ll know that Nero and I recently took a trip to Amsterdam so I could monitor his behaviour and training progress in a busy environment. If you’ve ever had the pleasure of visiting this vibrant city, you’ll know central Amsterdam is the definition of crowded. We were surrounded by all kinds of distractions including trams, horses, hundreds of people on bikes and a loud fun fair to name but a few. I learnt that Nero is the perfect crowd control ‘tool’ – the sea of people separated so easily when they saw us coming, giving us plenty of space to glide through the capital.

As we approached Dam square I thought it best to put the gentle leader on to help guide Nero through the chaos.  It’s a great device that I will continue to use when introducing Nero to a new situation. It makes it much easier as a handler to control your dogs movement with little effort. I only used it for a few minutes before realising there was no need. He wasn’t trying to pull me in a certain direction or shy away from everything that was going on around us. He was calmly confident and looked to me for direction. 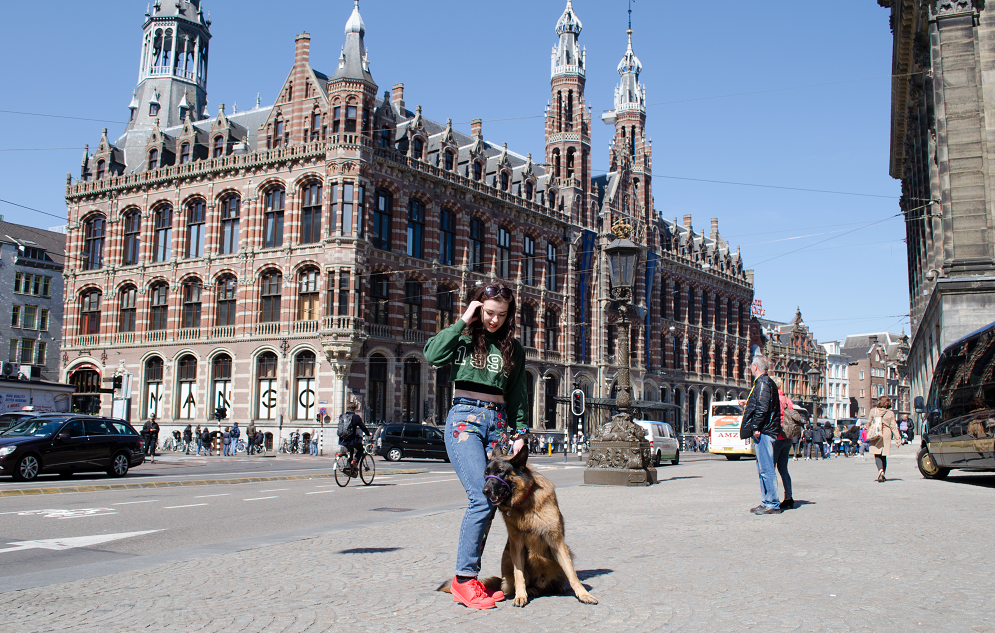 When we reached Dam square, I considered walking around the square itself as there was a fair being held with ridiculously loud rides and high pitched screams from the people being thrown around above us. There were machine melodies, tannoy announcements and a smoke-breathing mechanical dragon, not to mention all the smells. I tried to ignore the delicious aroma of fresh candy floss and hotdogs but temptation got the better of me. Did you know that a dog’s sense of smell is supposedly a thousand times greater than that of a human?! I can’t even imagine what scents Nero was picking up. Regardless of what he was seeing/smelling/hearing he kept a clam state of mind and stayed by my side. 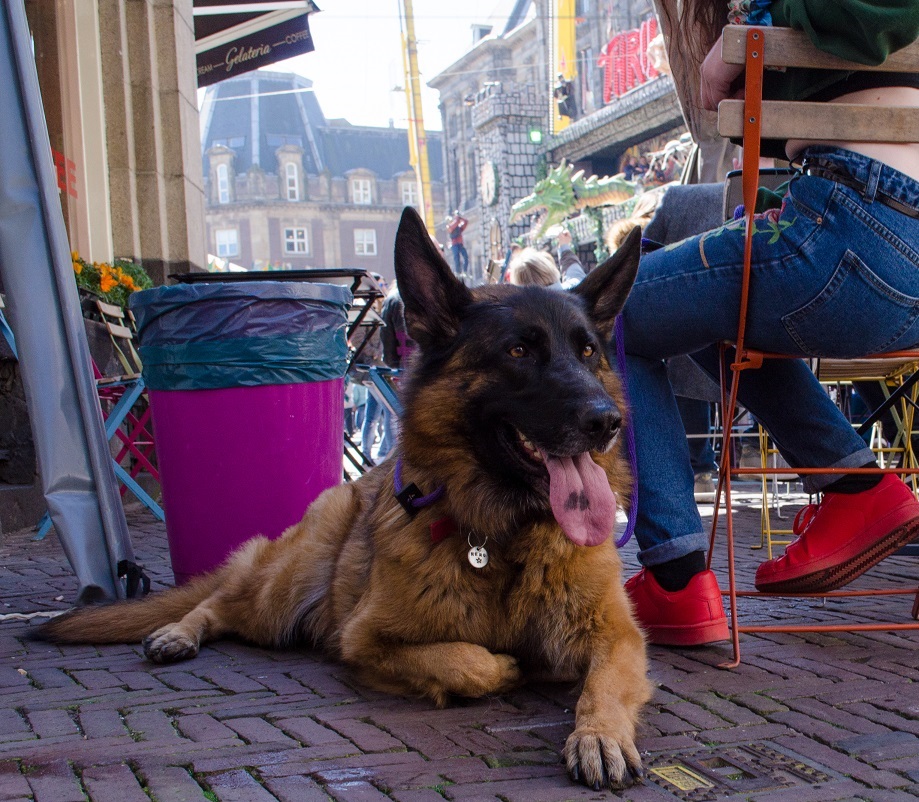 I decided to sit down for a quick cup of coffee before continuing through the city. We sat outside a cute little café and when the waitress came to take my order the first thing she said was “I know you and your dog. He has Instagram right? I think I follow him!” This really made my day! Although we have been  recognised fairly regularly, it was a first for it to happen right in the centre of Amsterdam. She stayed outside with us for a few minutes giving Nero all the fuss that he deserved and brought out a big water bowl for him.  After seeing that Nero was friendly, I was then asked by three other surrounding customers if they too could say hello. He did incredibly well relaxing whilst I finished my cup and only barked once at a pair of regal looking Doberman’s that passed through Dam square. He kept his attention on my movement and we received so many compliments that I can’t wait to take him again!

I was genuinely shocked at the amount of people approaching to pet Nero. Usually people avoid us or just stare in amazement at Nero’s build and size.  I’d like to take this opportunity to emphasise how important it is to ASK before you stroke any unfamiliar dog. There were at least three individuals who came right up to Nero and petted him right on top of his head – obviously Nero has no issue with affection (the more the better for him) but there is no guarantee that a dog will be as accepting of a stranger as he is.  Always ask the owner – nine times out of ten there will be no problem but there’s always one who will lean in to stroke an aggressive dog and end up being bitten. We also met a few children  (who were very well educated) that came over to us and asked if they could ‘touch the wolf.’ This made me giggle as they recited Little Red Riding Hood lines such as  ‘oooo what big teeth you have’ and  ‘oooo what big ears you have’ whilst stroking Nero.

We stopped at some of the landmarks and pretty canals to snap some photos on the way back. There were even random tourists taking pictures of my BFG and I. Nero is such a poser – he happily sat there soaking up the sunshine whilst these passers-by ‘oooohd’ and ‘awwwd”at him.  It’s safe to say that we get noticed when we’re out and about.