When your dog doesn’t mix well with other dogs life can get complicated. Shout out to all the dog owners who know exactly what I mean.

I’ve been there. I completely understand the emotional stress and humiliation a reactive dog can cause. Taking an enjoyable walk with your dog is tainted by their dislike of other canines. You’ll hide behind cars or around corners, even change your route to avoid that dog in the distance.  That feeling that you can’t fully relax and enjoy your furry companion because your constantly on the look out to avoid the next confrontation. Don’t accept defeat! “Sorry, my dog hates other dogs” needn’t be your daily quote to excuse your dogs attitude. How many times do you repeat those exact words? You are not alone. In fact, dog-on- dog aggression is one of the most common behavioural problems. There are various types of aggression including fear, dominant, possessive, territorial and even health to name but a few.

Nero was the definition of dog aggressive when I adopted him.  Upon spotting another dog, his hackles would raise, his fur would go on end and he would lunge and bark continuously until that dog disappeared from sight. Then there was me at the other end of the leash trying to calm a fifty kilo power-house that wouldn’t listen.  I remember the looks of disproval from passers-by as they silently judged me because of my dogs behaviour.  Oh, how I hated it. They didn’t know he was adopted from the shelter and that I was just getting to grips with our training. I couldn’t help but feel that their perception was amplified due to the stereo-typing that surrounds power breeds. Being a bigger than average German Shepherd, Nero has the ability to keep people at bay simply by looking them. 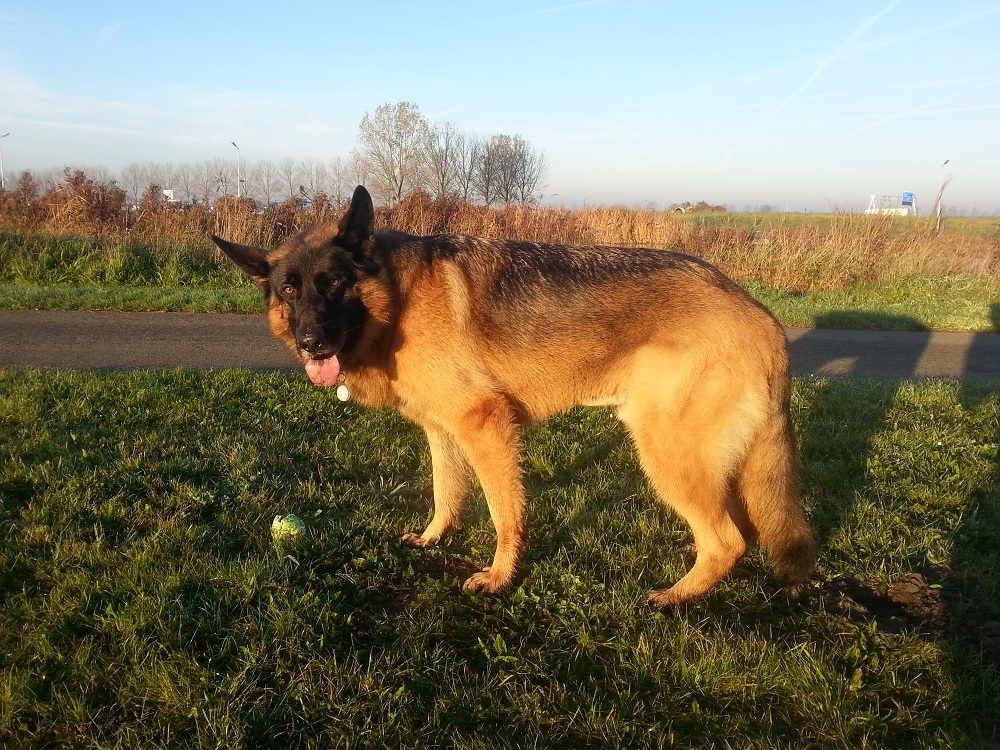 During my interview for Nero’s adoption at the shelter, I was informed this was the main reason that his previous owners had given him up. Being slightly older themselves, they could no longer handle the aggression and strength that he portrayed. I was told that as a puppy, he had been part of a dog attack in which both he and his paw-tner were hurt. Since that day Nero had never been comfortable in the company of other dogs. He had become ‘fear’ aggressive. The shelter workers stressed that he would never be a ‘social’ dog but this fell on deaf ears as I had already imagined him and Daisy (my family’s Cavoodle)  becoming best friends and knew that I would be the one to alter his reactivity. I understood the responsibility I was taking on when I signed the papers. I knew it would take time, patience and a lot of hard work to rehabilitate Nero to the stage he is today. 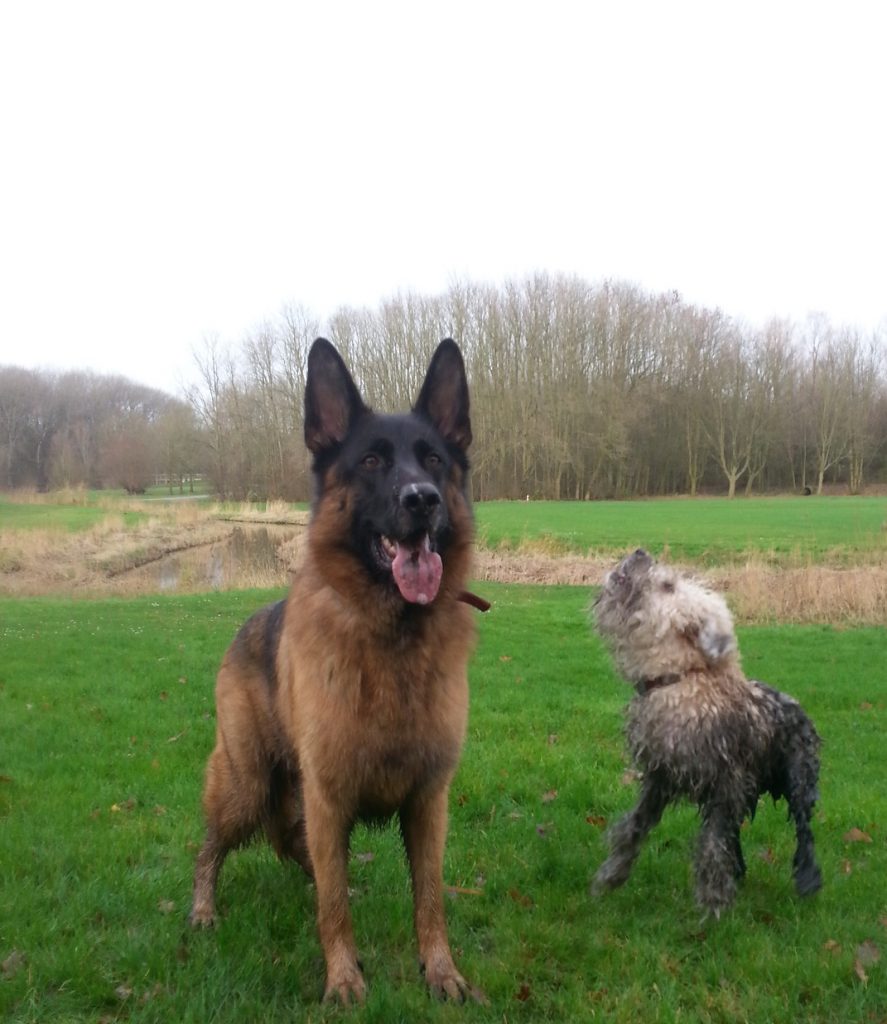 I began our training by learning Nero’s body language. If I could spot his tells of aggression before he acted, I stood a better chance of redirecting his focus. I started to understand Nero’s ‘safety zone’ and at what distance he would begin to show aggression. I learnt to tell the difference in the pitches of his bark. His ears and posture spoke volumes when I knew what to look for. The position of his head and movement of his tail helped me to know exactly what he was thinking and when he was going to react.

With so much choice of walking leads and accessories for your dog it can be rather daunting to know which to pick. I was amazed at the difference in Nero’s behaviour towards passing dogs depending on the leash he was wearing. I tried everything and spent a lot of time and even more money investing in different tools. Originally, I had Nero on the simple collar clip and leash but I found I had little control over his movements. He pulled me everywhere! After hours of walking, I decided against the new harness I had purchased for Nero. It only seemed to enhance his pulling strength.  I tried a gentle leader (which was amazing to teach Nero to walk beside me ) but I felt like it was hurting him when he would lunge towards another dog. Finally I went to the pet store and purchased a simple slip leash. Nothing fancy about it, just a simple nylon line with an adjustable toggle. I positioned this high up behind his ears which enabled me to control his head movement much easier and apply corrections when necessary. A ‘correction’ is not intended to cause your dog pain but rather redirect their attention. Do not practice this method without  being shown a demonstration from a professional as there is a specific technique involved. I always make sure the leash is loose with no tension and if Nero becomes too focused on another dog, I give a quick and light tug with my wrist to the side. I use this leash everyday on our daily walks and it has worked wonders for our training! Although Nero is tons better when on leash, occasionally he gives in to old habits and puts on a display of barking that lasts (now) less than three seconds.  I can calm Nero almost instantly. Some dogs are actually ‘leash reactive’ and find other dogs in their space more acceptable when they still have the option to flee.

I’ve mentioned it before and I will again. YOU have to feel comfortable and confident when walking an aggressive dog. Human fear is portrayed in various forms and dogs sense everything. If your heart misses a beat every time you spot a dog, your woofer will know and alert mode will automatically be triggered. I’ve received many messages from owners around the world asking how to do this. The trick is to remember to breathe, stay calm, don’t tense up or focus on the other dog approaching. Keep that lead loose and free of any tightening that usually happens when you see a dog. Remain prepared but not scared. Imagine the situation going perfectly. You’ll be amazed at the effects positive thinking can reveal! I also found that walking Nero with another dog (whilst both on leash) helped to build his confidence. 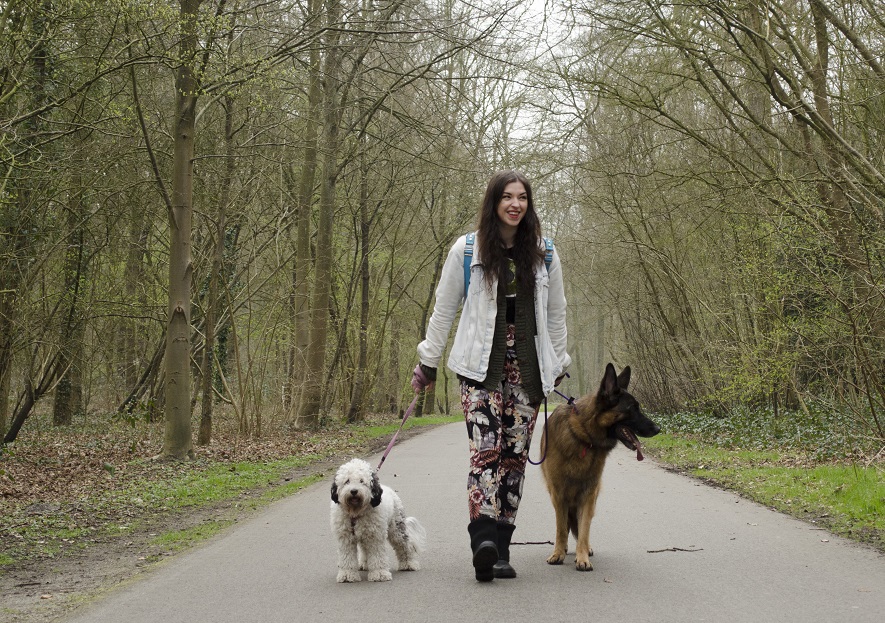 Stealing your dogs focus back once they have set eyes on that other dog is hard at the best of times. If you’re lucky enough to have a food driven pup, you may find taking a bag of their favourite treats out with you may help. As soon as you notice their attention is locking, distract with a treat and attempt to continue walking. If your fur-friend succeeds in ignoring the other dog, reward by positive reinforcement (lots of praise and treats.) This method worked a few times with Nero, but nothing beat my trusty tennis ball. The aim of the game is ultimately to have you as the main focus, but the transition period will probably need an object of distraction to begin with. In my case, Nero’s passion for fetch allowed me to introduce him to multiple dogs with no worry of him becoming aggressive. You can watch the earlier videos on our Instagram account @zero2nero and see exactly what I mean!

Shying away from a dog encounter (even if it’s on opposite sides of the street) will only keep your dogs behaviour the way it is. Trust yourself and show your dog you are not afraid.  Try not to care what others may think. Practice makes perfect and the more scenarios you face with your dog at your side the better. Once I had the confidence that I could calm Nero, I went searching the streets for other dogs, just so we could reinforce and practice the acceptable behaviour I knew he was capable of. 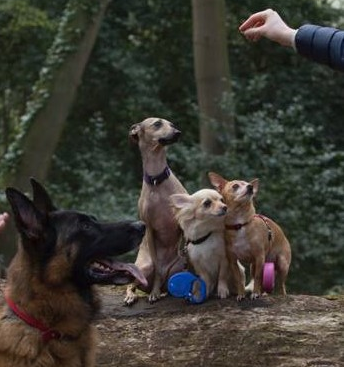