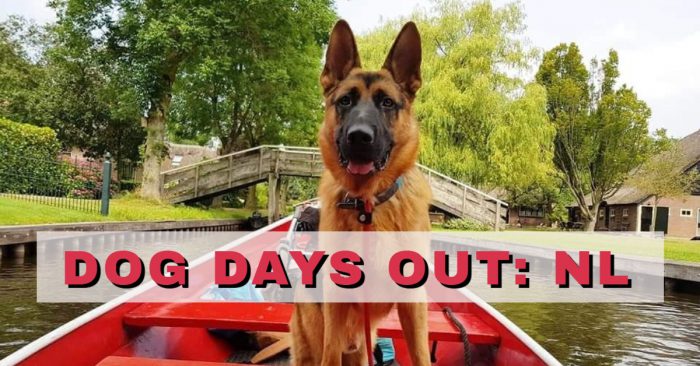 “Can my dog come too?” Is a phrase I often ask.

It’s no secret that well-behaved dogs have more freedom. Putting your training to the test in real life situations builds confidence and reinforcement history at both ends of the leash. I like to seize every opportunity possible. A dog will benefit from exposure and training in a variety of social situations. They become a balanced canine citizen to be proud of and one that gets to explore the world at your side.

All those scents never sniffed and stimuli never seen are exciting and engaging. Enrichment and exposure are essential pieces of the training puzzle to achieve a successful bond built on trust, communication, understanding and love.

Luckily, The Netherlands is generally very dog-friendly. Bars, cafe’s and even shops will welcome wet noses with a smile…and often house a secret stash of dog cookies behind the counter. Train don’t complain is our motto for a reason. Practice, proof and repeat. Drills before skills.

I was shocked that dogs were allowed to enter Dierenpark Amersfoort. Flabbergasted, actually. I bet many of you had exactly the same reaction reading that? It’s true – dogs are permitted on the premises (free of charge, may I add.)

I can only imagine the plethora of scents surrounding Kygo. Even to our meer human olfaction system, the zoo offers quite a variety of distinctive odours. Kygo had a close encounter with a couple of curious giraffes that approached us from the other side of their enclosure. He sat confidently, sniffing away and silently observing the gentle giants. The pair seemed equally as amused by him as they looked down in-between nibbling the trees. Energy really is everything in the animal kingdom and it was fascinating to witness such calm between two entirely different species.

Interestingly, Kygo point blank refused to go near the predator paddocks – the big cats and grizzly bear he completely avoided. The second he caught the scent as we got closer to their area he went into flight mode – a state I’ve rarely seen him engage with. Yet, when it came to the wolves he became excited and pulled towards them. Upon arrival at the fence, the pack started pacing fast around their enclosure, concerned or curious with Kygo’s presence it was hard to tell but intense none the less. They were not able to see Kygo as the walls were so high but we all know how much a canine relies on it’s most primitive sense… Kygo also saw some camels – they were pretty chilled and couldn’t care less that there was a German Shepherd watching them do their thing. It was the same story with the family of elephants… Overall, I thoroughly enjoyed taking my dog to the zoo. We were there for most of the day and Kygo experienced enrichment on an entirely different scale in a completely unique environment. He slept the entire car journey home and we didn’t hear a peep from him until the following afternoon. We were incredibly proud of him and his behaviour around the other animals.

Kygo went to Keukenhof! As you can see from the snap below, he was pretty damn chuffed about it. This popular tourist destination is dog friendly and accessible. There’s plenty of cafe’s scattered around to sit and have a cuppa or grab a bite to eat. Dogs are not allowed in the pavilions but are permitted everywhere else free of charge. We even climbed up to the top of the windmill! Be warned, your pup will probably want to sniff ALOT – we did our best to ensure Kygo had emptied the tank prior to entering to avoid any tinkling on the tulips. We saw plenty of other doggies around and it’s worth noting that ALOT of tourists and dog lovers will approach you for photo opportunities. It seemed all the Shepherd lovers were out that day so our Ky received plenty of pets, compliments and admiration. We spent a little over an hour and a half wandering around the various displays – it was cool to tick it off the bucket list!

I’ll be honest, I had no idea what the heck a pontoon was till we ended up randomly renting one for the day… We set out with the intentions of hiring a boat from a local buisiness in Zwanenberg but were pleasantly surprised when we spotted a floating raft with a steering wheel and railings. The owner kindly offered us the option of boat or pontoon and being the adventurers we are, decided to take the pontoon for a play. There was no extra charge for woofers but we did call ahead and check that dogs were allowed aboard. We set out on the long journey to Haarlem (I’m not kidding, it took FOREVER) pontoon-ing along at a pace that would test even the most patient of people. From Zwanenberg to Haarlem I believe it took us around 3 hours…with minimal stops and waiting for the odd bridge traffic. Kygo warmed to this new floating platform fast – he’s naturally savvy when it comes to weight distribution and balance which serves him well as a sea dog! When he realised he had a 360 degree view of his surroundings and free movement, he was content observing the passing boats and ducks from various angles. The guy thought we were very optimistic when we told him we were heading to Haarlem. At the time, we didn’t realise quite how slow this mode of transport was. However, he wished us luck, gave us an extra tank of fuel and simply said to drop him a text when we dropped the pontoon back. Easy peasy and a lot of fun!

We took a road trip to Giethoorn – the Venice of The Netherlands where the usual method of transport is by boat. This is perhaps one of my favourite days out ever! Combine the charm of traditional Dutch houses, NO roads (yes, you read that correctly – you get about by foot or on the water) and an endless maze of canals and you have a vague idea of what it’s like to visit this stunning village. Located in the province of Overijssel in the East of The Netherlands, Giethoorn is a real hidden gem. Drifting under wooden bridges, admiring centuries-old thatched rooves, occasionally crashing into other boats captained by tourists who (like you) have no idea how to navigate such narrow, obstacle rich canals …it’s a truly fantastic day out!

You can also ponder out to the huge lake where you’re able to swim or pull up to the floating ice cream shop or dock in the restraunt (which is also dog-friendly!) Again, no extra charge for canines tagging along! Brederode Castle dates back to the 13th century and boasts a long history. If you fancy stepping back in time and wandering a smaller yet impressive piece of the past in a beautiful location, Brederode ticks the boxes. The ruins became the first national monument of The Netherlands and is one of the first restorations conducted by the government. Just entering the grounds is a confidence course to conquer. Navigating narrow bridges over water was a challenge for Kygo but one that he overcame quickly once those front paws made contact with the help of luring and target training. (Never underestimate the power of these training techniques people!) King Ky always prevails! There are various areas in the castle that require concentration and ultimately a good understanding of proprioception (body awareness) from your pooch. Climbing and descending aged, spiralling, brick staircases for example. It’s a bit of a workout but the beautiful view you are rewarded with once you reach the top of the tower is worth every effort. There are a few items on display to view inside the castle. Think medieval torture devices, weapons and various contraptions that were uncovered on the grounds. (I found it pretty cool but I’m a geek like that.) There is also a small café offering hot and cold beverages and snacks located just in front of the main bridge next to the water. The coffee was great, the staff were awesome and very attentive to our Kygo – asking if we wanted water for him (we always carry our own bottle and bowl) and if they could greet him. They complimented his good behaviour along with other visitors inside the castle walls which is always great reinforcement for us! Due to its size, the castle does not take particularly long to scout. Throw in a cuppa and a light snack and you’re looking at around a 1.5 – 2 hour total visit. We highly recommend checking it out (as well as the rest of the locations mentioned above!) If you do go and explore, make sure you tag us on social media so we can see what you and your dog get up to. If you have any questions or know a place we should visit, please don’t be shy and bark at us!