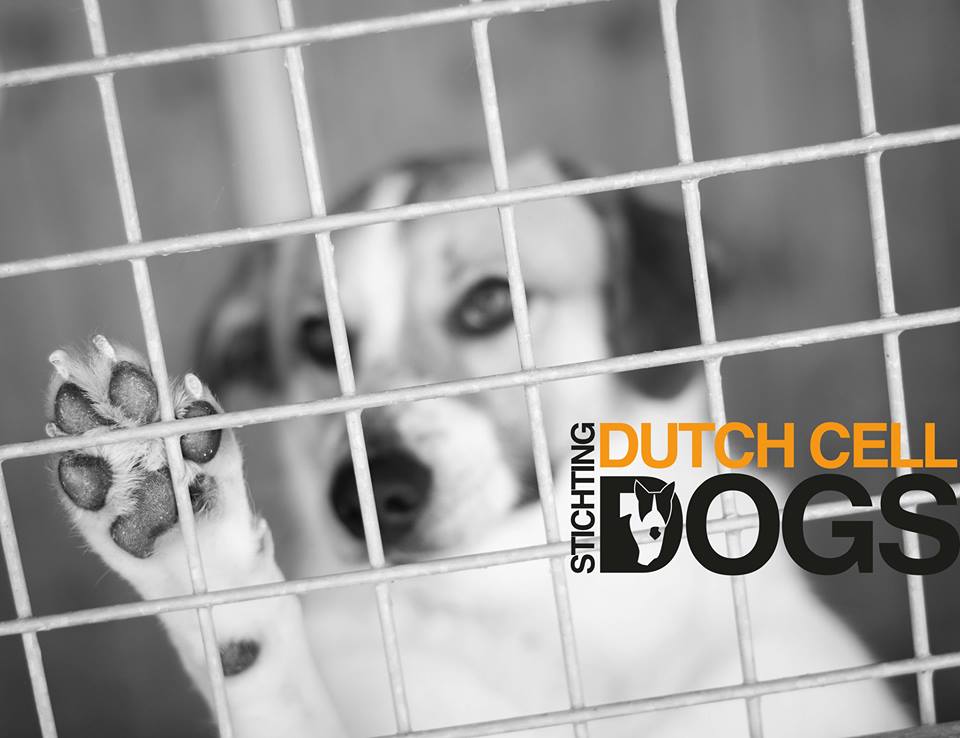 Both humans and dogs can find themselves losing their freedom and living behind bars. The trust in others trickles away and the desire to form friendships of any nature quickly dissolves when placed in such an environment…

Dutch Cell Dogs is a successful foundation that was set up in 2007 by Marlies de Bats and Betty Buijtels – two awesome ladies with a powerful vision: teaching inmates of local prisons and juvenile centres to train unwanted shelter dogs in the hopes of increasing their chance of adoption. (A few of the Dutch Cell Dog crew sitting in the back of their DCD van.) (The DCD van has multiple individual cages in the back for safe dog transportation.)

In turn, this programme teaches the inmates not only how to clicker train a dog, but gives them the opportunity to learn crucial life skills such as patience, compassion, understanding, responsibility, confidence and the value and structure of teamwork. Anyone that has trained a dog will know the challenges that accompany such an activity and the feeling of pride and happiness when a dog accomplishes the task at hand. As the inmates are taught in group classes, they form friendships with one another, rekindling interactions and emotions that they may have left on the other side of the prison gates upon arrival. Majority of these dogs and detainees have lost trust in relationships. Some shelter dogs are accompanied by a horrible history of abuse at the hands of humans so building that bond and foundation of friendship is not only essential for a dog to be rehomed but can be extremely difficult for the trainer. It’s a challenge that the inmates accept with open arms.

When I discovered Dutch Cell Dogs online, I was so impressed by their ideology and success rate that I immediately contacted them to ask if I could write a dog blog post describing what it is they do. I was ecstatic when they replied that they liked the look of Nero Dog Training and that they would be happy to invite me to a demonstration day at the male juvenile institution (Rijks Justitiële Jeugdinrichting Den Hey-Acker) in Breda. (The outside of the Juvenile detention centre.)

Having never been to a prison or institution of any kind, I really had no idea what to expect. The one and a half hour drive from Amsterdam was pretty smooth and despite taking a couple of wrong turns, I ended up in the car park prompt and prepared – or so I thought. As I walked through the gates and handed over my passport to security personnel, I was asked to place my belongings in a tray to be checked and to remove all jewellery before walking through the metal detector. Confident though I was in knowing I had nothing to hide, the scanner had other ideas and kept beeping every time I walked through its gates. After multiple attempts, the prison guard suggested that it could be the hooks of my bra that were setting off the alarms…

There I am wearing a jumpsuit, giggling with embarrassment as I told them there is no possible way I can take it off without getting fully undressed. Being surrounded by nothing but glass windows and male officers, I cursed the inconvenience of a one piece suit!  Luckily, I was shown by another staff member to a private toilet in which I could quickly take off the beep bra before having to walk through the detector again and place my lady garment in the tray. Sure enough, the guard was right and I passed through with silence! Completely red and thankful I had worn my hair down (girls, you understand) I grabbed my belongings and continued through the building to join the other invited guests in the waiting area.

After pouring some coffee, I ended up being introduced to and chatting with some amazing people, many of whom worked in shelters or were the parents of some of the boys that were serving time in the institution. After introductions, we were lead to the grounds outside where we caught our first glimpse of the class taking place on the field. Each participant was geared up with a training treat bag, clicker and a dog. I could instantly see that there was indeed a bond that had formed between each detainee and dog. The eye contact that was offered, the wagging tails and relaxed training manner was a delight to watch. Our group was invited to join in the class by using our presence as a real life distraction whilst the boys and dogs practiced recalls from a distance.

I had chance to speak with a few of the guys who were working with the dogs to ask them their opinions regarding the programme and there was nothing but positive comments, big smiles and plenty of affection being shown to their four legged friend. Knowing they only have a limited period of time together (7/8 weeks) was hard to accept. These dogs and boys may have found one another when they needed it most and knowing that a goodbye was inevitable really made me empathise with their situation. The guys told me how much they looked forward to training with the woofers twice a week, how much progress they had made, what issues they were still working on and what kind of character their dog possessed. Each individual was so proud of the canine at their side and hoped for nothing but the best for their future.

The guys were also presented with a certificate, a nice printed photo of the dog they had trained and had prepared a ‘trick’ to show off to the visitors (my favourite of which was the little Maltese Gabber jumping onto his handlers back whilst he was doing push ups.) I also asked if any of the inmates in the past had been released and adopted the dog that they trained during their sentence. Apparently, this indeed has occurred!

As the class finished, the dogs were lead back to the van to return to the shelter. Once put back in the cage, one of the dogs started to express anxiety and began barking and whining. Hearing the dog he had been training in distress, the inmate ran over and asked to open the cage door so he could comfort his dog. Upon contact, the dog immediately calmed as it nestled into his arms and received kisses on the top of his head. This display of affection was the only evidence anyone would need to witness to see that this connection was real and the benefit of what this programme can offer for both canine and human. It was a special moment, one that I won’t forget.

Witnessing first hand what DCD do for both the dogs and inmates on a daily basis is truly inspiring. The team informed me that they held classes at all the juvenile centres in Holland as well as majority of the male adult prisons. In some locations, the programme has a waiting list of inmates wishing to partake in changing a dogs life. They have plans to introduce DCD to the female prisons too – apparently which are few and far between in The Netherlands!

Here is a  collection of photos of the dogs I met in Breda that day, all of whom are up for adoption after completing the DCD programme. If you click on the dogs name, the link will take you straight to their shelter advert: What these dogs truly needed was a chance.  A human willing to spend the time, commitment and effort to help shape and teach new behaviours. (I can’t help but hum the OITNB theme tune in my head.)

Common shelter dog traits such as dog aggression are also addressed as the dogs are trained in a group environment, meaning they are exposed to their trigger but are able to create positive associations with another dogs presence by taking part in this programme. They learn to focus on the handler and practice obedience skills that will help to find them a forever home. They begin to build confidence and in turn, mans best friend becomes just that – a guiding paw and companion.

I’d just like to say a huge thank you to the Dutch Cell Dogs team for giving me the opportunity to visit them and truly understand their mission. They were all positive individuals with contagious enthusiasm and passion! Keep doing your things ladies, you’re totally rocking it. You’re changing the lives of so many dogs (420 and counting) and making a positive impact on the inmates that take part and I’m really proud to call you friends!

If you want to find out more about Dutch Cell Dogs, have a sniff at their site: dutchcelldogs.nl.